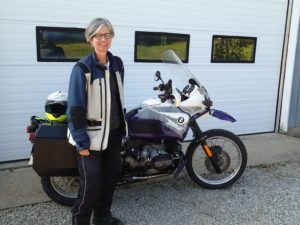 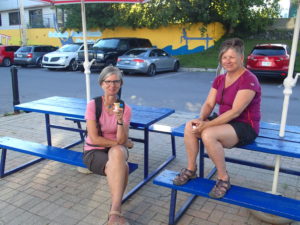 Feli and Jane enjoying an ice cream in Prescott

And last, but not least I’m riding my new(old) bike the BMW R100GS, that I had named Milka because of its partial purple color, so now I have the same bike as Heinz. Poor Eddie, my trusted motorcycle and friend in South America. I have left behind at home!!

I do have to say that Milka is a lot quieter and smoother than Eddie.

So the plan is to ride from here up north through Quebec to the Trans Labrador Highway, per ferry to Newfoundland, per ferry to Nova Scotia, per ferry (again!) to Prince Edward island and from there home through the new England States.

Anyway, Heinz and I left on Saturday morning after a little celebration the night before with our two birthday sons. We will miss their birthdays on July 31st!

We agreed to meet Jane at a Gas station along the 401 highway near Cambridge. Our destination for day 1 was Prescott, Ontario. It had been a smooth ride with some stop and go through Toronto and by roughly 4:30 to 5:0pm we arrived at our pre-booked Colonel’s Inn bed and breakfast in Prescott. 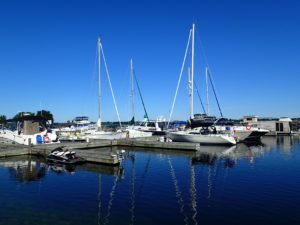 The weather was beautiful so we had a nice stroll along the waterfront of the St. Laurence and around historic Fort Wellington.

After a scrumptious breakfast we left on Sunday morning to ride to Boischatel, Quebec which is just past Quebec City. Highway riding only so not much to tell about.

Just when we pulled into the parking lot of our Econo Lodge in Boischatel Heinz noticed that the right front part of his bike was splattered with oil. After checking various options he found out that his fork seal was toast and the oil was leaking out from the right fork. 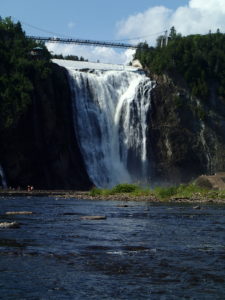 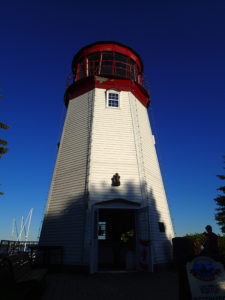 With the help of Daniel, whose phone number we found in the MOA member book ( BMW Owner) we located the BMW Dealership in Quebec City. Monday morning at opening time Heinz was on their doorstep, but of course they did not have the part he needed. Meanwhile Jane and I made some more phone calls and located the part in Sherbrooke and it was send the next day to Quebec City. So we had an extra day of rest in Boischatel. We went to see the Montmorency Falls, strolled around little town of Boischatel and watched some kite surfers on the St.Laurence. 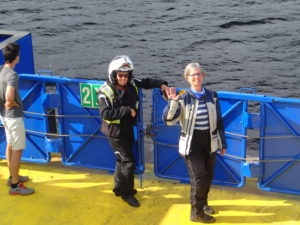 Unfortunately there was no restaurant in walking distance of our Econo Lodge, only Subway and Tim Horton’s, so that had to do for 2 days. ( We are so done with Subway!!!)We ran into Jonathan from Texas who was on the road with the same bike as ours and had a lovely chat with him.

The next day after a quick installation of the fork seal from Heinz we could continue our trip to Baie Comeau, Quebec. That was truly beautiful through small picturesque towns along the St. Laurence. We took a small ferry to cross the Saguenay River on the way to Tadoussac, which is also famous for whale watching.

One thought on “On To New Adventures – Going East”