Baie Comeau, not a very attractive town, probably only famous for the town where Brian Mulroney grew up and for us just a night to spend!! Next day we had a 7 hour trip to Labrador City in front of us. 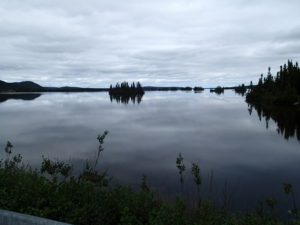 Labrador lots of lakes and lots of spruce trees 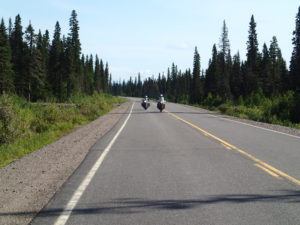 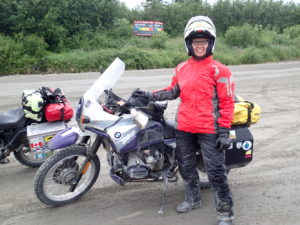 End of a muddy day 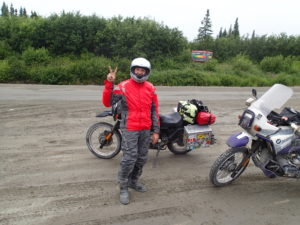 Made it to the gas station 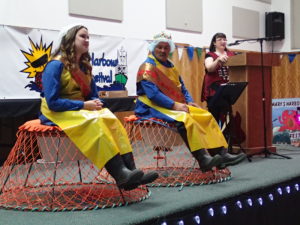 It all started well until we hit gravel. On Jane’s bike one screw of her front light came loose and was lost, so Heinz had to fix that. Then Jane’s bike kept stalling and the whole electric system was screwed up. At some point the bike wouldn’t start at all. We were in the middle of nowhere and it was raining heavily. We had a couple of hours to go to Labrador and did not want to ride in the dark. A truck stopped and the guy asked if he could help. Quick decision was made that we would leave Jane’s bike at the roadside and she would go in the truck and organize a tow truck to get the bike to Lab City while Heinz and I would continue with our bikes. It still took us a couple of hours on a bumpy road and slippery gravel in the pouring rain to finally arrive looking like mud pigs in Lab City.

Jane already greeted us at our Motel, where she also had just arrived. She had organized a tow truck already who was to bring the bike to us during the night.

A well deserved meal at “Pizza delight” next door elevated our spirits a bit. We weren’t sure what was wrong with Jane’s bike and if the three of us could still go on.

Next day Heinz was up at 7:00am to check on the bike that had indeed arrived over night. First thing was to start with the battery and…sure enough the screw on the “negative” wire was loose, Oh what a simple fix ( and…expensive towing for that matter!!) We were all elated and could continue our trip all together. Next thing we knew there was a couple from Belgium traveling with a rental car and in the Hotel Room beside. They had trouble with their car and asked Heinz for advice. Then Jonathan, our friend from Texas also arrived, needing advice for an oil leak on his bike.

By then Heinz mentioned that he would soon charge people for his advice!!!

Anyway we needed to get going…our next destination was Happy Valley Goose Bay…approx.. 5 hours of paved country road. Beautiful scenery, cool but sunny weather…lots of lakes, spruce trees…unfortunately no wildlife to be seen. We passed through Churchill Falls, famous for the huge hydroelectric power plant. There wasn’t time to visit the plant and take a tour. 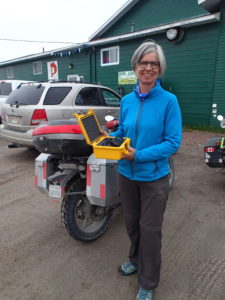 Borrowing a satellite phone is free in Labrador 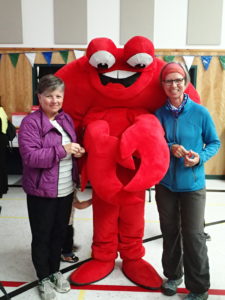 Crab is the only game in town

Whenever we stopped on the side of the road, there were swarms of mosquitoes and black flies all around us. Terrible, but quite common for this area. Late afternoon we arrived in Happy Valley and soon it turned foggy and rainy. This town is known for its military air base, that had been used by various NATO countries in the past to practice low flying manoeuvres. Right now there’s only the Canadian forces left and therefore the town has changed in size. For us it was merely to spend another night. We didn’t venture out into town at all. 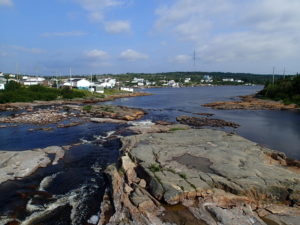 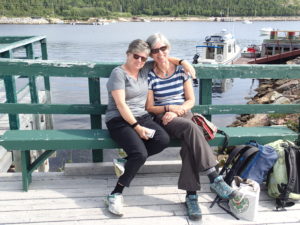 Waiting for the ferry to Battle Harbour

The next day we had to get from there to Marry’s Harbour, which is pretty much the end of the Translabrador Highway. Only the first about 100 km of the whole stretch were paved, the rest…all dirt road. We all mastered it very well…an easy, well maintained road with regular traffic of cars, trucks and mega big mining trucks. After several hours we arrived in Port Hope Simpson, which has the first Gas Station after about 400 kms. Heinz and my bikes still had Gas left, but Jane with her BMW 650 had to fuel up! We were muddy, cold and hungry!!

So another 50km or so and we arrived in Marry’s Harbour, a small community that could only be reached by plane or boat until 2000.

When we were about to check into our Hotel, we were told that on that night it was the start of the annual Crab Festival in town, everyone was busy getting ready for it and that we’d better hurry so we could make it, too! We were starving and after we were told, that there would be numerous crab dishes to taste we were more than willing to go!

We spent a fun night at the community center with the town folks, watched the crowning of the King and Queen of the Crab, learned to sing the anthem of Labrador, talked to one of the MPs from Labrador and…of course stuffed ourselves with local home made crab dishes that were absolutely delicious!! What an opportunity!