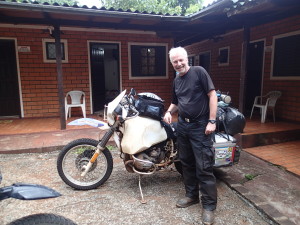 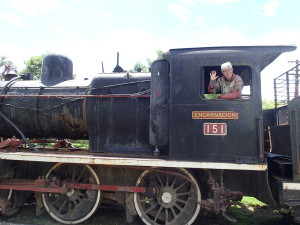 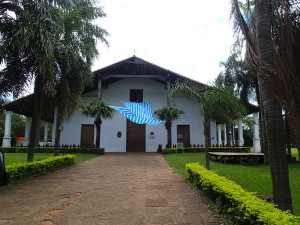 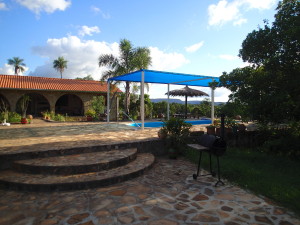 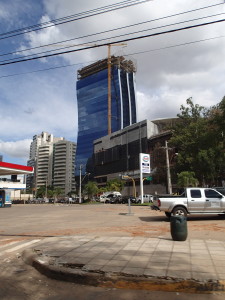 Modern High-rises going up in Ascuncion 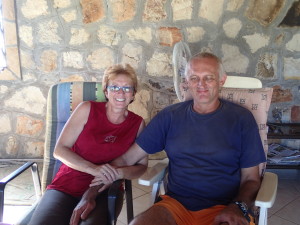 Klaus and Andrea, our hosts in Paraguay 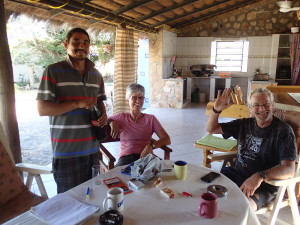 Joining us there are Mike and Frank 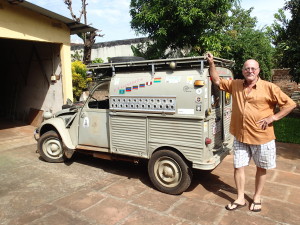 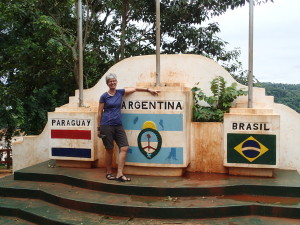 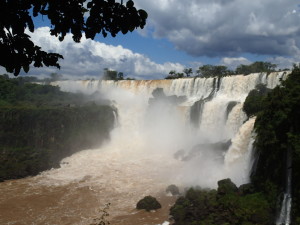 Iguazu Falls from the Argentinian Side 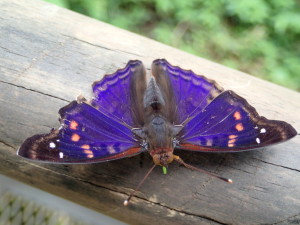 Butterflies in all colours 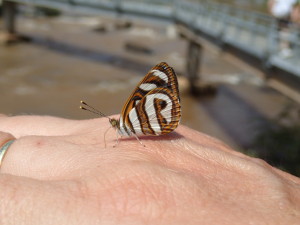 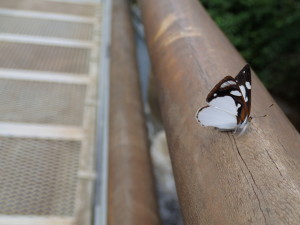 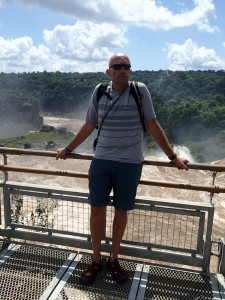 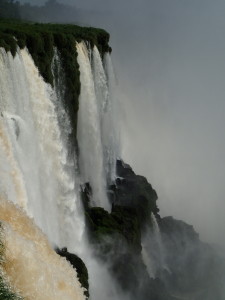 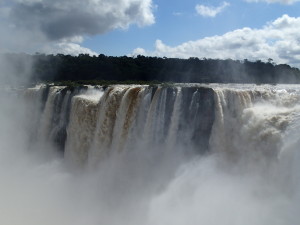 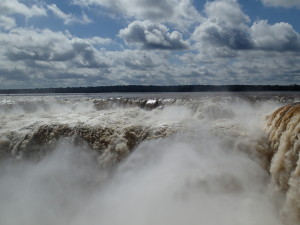 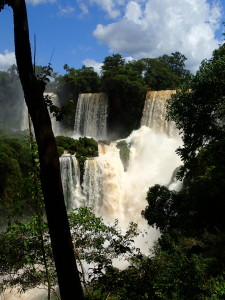 One of many falls at Iguazu

Wednesday morning after one last breakfast together with Frank and Mike we left our cozy Camping Internacional in Foz do Iguazu. Just 5 minutes into the ride it started to rain heavily. We put on our raingear while Mike and Frank rode on. The border crossing into Paraguay was easy again because there was really no control at all. There is a 30km radius of free trade zone around these 2 border crossings Paraguay and Brazil, so no worries for us. I cannot really say that Paraguay is very attractive. It is fairly flat and not very rich beside a lot of German immigrants, who usually come with lots of money.

We rode on the main highway towards Asuncion through agricultural land with sugarcane, corn and soy fields and…what is most annoying is that the armada of small motorcycles, like in Columbia, is back and want to pass you on both sides constantly in the cities.

We were stopped twice by police, who wanted to see our papers and passports and of course were looking for our entrance stamp into the country. A bit of a tense moment but we (innocently!) were trying to tell them that we were just picking up a new tire in Asuncion and then would go right back. The first guy was muttering something like…”pagar mucho”… (oh boy, I thought!) but then waved us through. Phew!! The second police stop required some discussion amongst several policemen until they also waved us through. Finally after about 6 hours we arrived in Caacupe where Klaus and Andrea live. They left Germany 7 years ago and immigrated to Paraguay. They have an almost hacienda-like property a little isolated on a hillside with a separate guesthouse and…a pool. And they also have donkeys, actually a little family with Mom (Emma), Dad (Emil), and son (Erich). Very cute!

After several break-ins though they do not feel safe there anymore. They have planned to sell the place buy an overlander camper/truck and go around the world.

It really felt like a luxury mini-vacation. Next day Klaus took us on an excursion with the bikes, oh and I forgot to mention he has a BMW 1200 GS. We went to a small national park called Vapor Cue, where they had two old steam ships on display, which used to transport supplies on the Rio Paraguay around the turn of the last century.  Then we visited Yaguaron, a small town with an 18-century Franciscan Church, which is a landmark of colonial architecture. Most of the church was made out of wood, it was actually a work of both the Franciscans and the indigenous Guarani people. The Guarani and also their language are still very much present today.

The church was closed for renovation, but we located a guy, who was willing to open up the church for us (of course for a little bribe!!) after Klaus told him that we came all the way from Canada!

Friday we spent almost all day in Asuncion picking up Heinz’ tire from Touratech and trying to get it balanced somewhere (no one was able to!). Traffic was relentless and you always have to remember       “siesta” time, which means from 12 noon until 1 or 2 o’clock… everything is closed.

Saturday, Frank and Mike came by as well and we had a great evening with lots of delicious food and drinks and stories. I also have to mention that Andrea, Klaus’ wife is a professional hairdresser and she gave me another good haircut and evened out all mistakes (?) made by the hairdresser in Rio Grande.

Sunday was spent lazy at the pool and reading on the pool lounges…like I said mini-vacation!

On Monday it was time to leave for all of us. Frank and Mike wanted to continue up northwest towards Bolivia and we wanted to pay Walter a visit. We had met him at the bikers meeting the week before, where he showed up with one of his Citroens 2CV called “La Gordita.”  Walter is a 65 year old German, who lives in Coronel Oviedo, Paraguay for a number of years now and is also married to Dominga, a girl with Guarani roots from Paraguay. He owns several old Citroens 2CV’s and also offers his services as a tourist guide for individual trips with his cars (Citroens or old jeeps) through South America. He has also done a trip of several months through South America with his wife “Domi” and wrote a book about this. Quite a unique guy! We again had a great evening with lots of stories and…lots of beer as well!

We made our way back into Argentina through Foz do Iguazu, Brazil without any police control. Since we did not have a visa neither for Brazil nor for Paraguay we had to go back the same way we came in. We are back at our Hotel in Puerto Iguazu and it almost feels familiar and comfortable to be back in Argentina. After all we had been in this country for so long already before. We wanted to visit the Iguazu waterfalls from the Argentinean side before going back to Mendoza. On Wednesday it rained all day, so there was no chance. Thursday it didn’t rain but was dark and cloudy almost all day. We took the chance to walk around in town and went to the place where the three countries Argentina, Brazil and Paraguay meet. Finally on Friday the weather was sunny with only a bit of clouds so we went to see the falls.

It is a different perspective compared to the Brazil side. There are more individual waterfalls (with names) which you can visit. The one standing out is the ”garganta del diablo” or the devil’s throat, a large round shaped area with huge water masses coming down from all sides.

There’s more walking through the rainforest involved on this side, a welcomed change for us after hanging out in the hotel all day the day before, but of course with hordes of tourists.

Tomorrow it will be time to pack the bikes again and ride southwest towards our final destination Santiago.