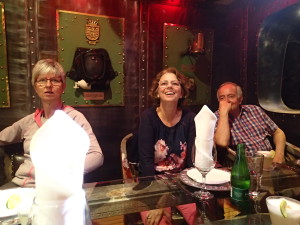 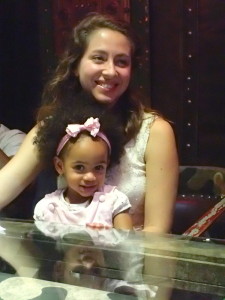 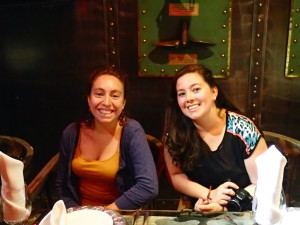 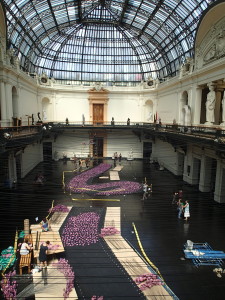 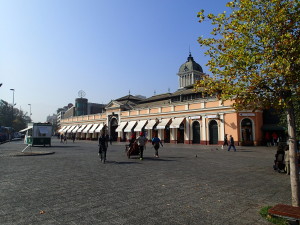 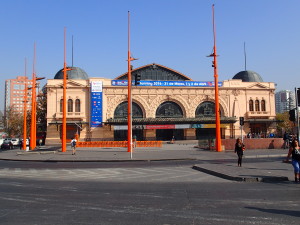 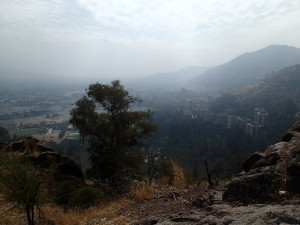 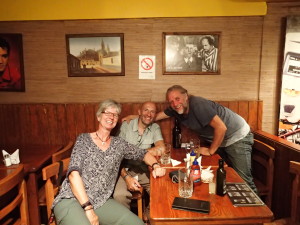 Bali Franz is happy to see us again 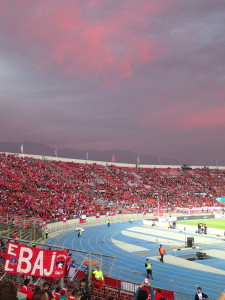 The mood was still good after Chile scored first 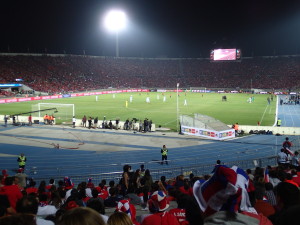 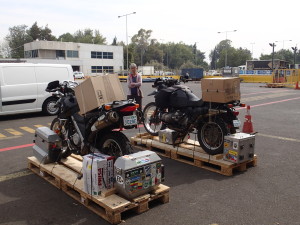 Bikes are prepared to leave for Miami 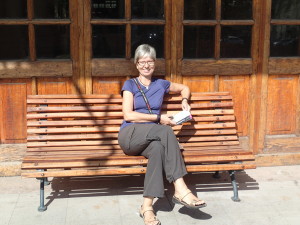 I am sitting on my cousin’s patio in beautiful Santiago on our last day in South America. Last Sunday we arrived here from Mendoza, Argentina and again were welcomed with open arms. They were happy to have us back!

Monday we spent a lazy day at home, catching up and reading. On Tuesday we went to see the agency, which would arrange to fly our bikes to Miami. Bertha, one of my cousin’s daughter drove us to the airport and also helped us to translate. She was a vital part, because Pamela from eCargo plus did not speak English very well. After all the questions were answered, we agreed to have the bikes at international Cargo on Monday morning 10 o’clock on March 28th.

Wednesday I spent some hours by myself in town. I went to the Museum of Memory and Human Rights, which Heinz had already seen the last time we were here, when I wasn’t supposed to walk a lot due to my injury.

This Museum is all about the Pinochet dictatorship from the start on September 11th 1973 including of course the human rights violations. It is very explicit and impressive and there was quiet and humble atmosphere, while I was there. The media was much more involved and there were lots of live Film clips, which showed exactly what happened on the very first day. I spent a couple of hours there.

I also had an afternoon by myself in downtown Santiago to do some window shopping and I must say I thoroughly enjoyed myself!

Thursday was the day of the soccer game. We had managed to get a hold of 2 tickets for the World Cup qualifying Soccer Game Chile vs. Argentina here in Santiago. It was to start at 8:30 pm, but we did not have assigned seats so we wanted to be there early to get a good seat. So we took the subway and just walked with the masses of people towards the stadium. What an atmosphere! Everybody dressed in red soccer jerseys equipped with a hat, a flag, a scarf or a vuvuzela making their ways to the event of the night.

We had a seat in the north corner behind one of the goals. Of course we were surrounded only by Chilean fans, who made their enthusiasm known loudly. We enjoyed the night even though Chile lost 1-2,but we also got a good view of Lionel Messi, Argentina’s (and the world’s, I believe) current most famous soccer player. Afterwards we had to squeeze our way into the Metro in order to get back to Maria’s place.

The weekend was spent with the family including all the three daughters, celebrating Easter and enjoying a night out for supper. Not to forget that we had to give our bikes a good clean and have them ready for the fly over on Monday.

Monday morning we drove out to the airport to deliver our bikes. The entire procedure took (in accordance with the South American “rules”) 4 -5 hours. After that our bikes were strapped on a palette and wrapped in clear foil. Let’s hope we will get them back in one piece in Miami!

This morning Heinz and I went into town one last time to the “ Mercado Central”, which is a big fish market and also has several restaurants. We also went to see the old railroad station, which was converted into a cultural center, after they abandoned the railroad in the 80’s. I stayed in town for a little longer and just strolled around a bit, to “la Moneda” the presidential palace, couldn’t get into the house at 38 Av. Londres, because it was closed. This address had been a famous one during Pinochet’s time where many people had been brought to and tortured and executed. It is now a memorial site!

So tonight our time is up, our journey will come to an end. Yes we will drive back home from Florida, which is kind of the end of the trip.

This part of the world here had been a big chunk of our journey though and I feel a bit sad to leave. I have learned to love and hate it. I love the Spanish around me, the vibrant life, the enthusiasm and temperament of all Latin-Americans and how friendly and welcoming they have always been. All countries had been breathtaking in all their flora and fauna. Yes at times it annoyed the hell out of me how inefficient people were, how disorganized and indifferent to the environment they were. Life has a very different pace here as well and I like that part!

It is my wish to come back again one day to explore the parts I have missed this time, so it will only be a