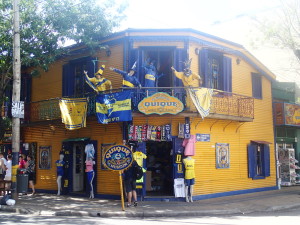 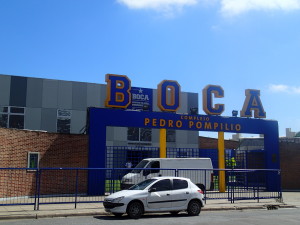 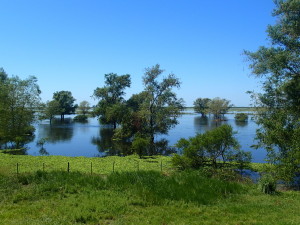 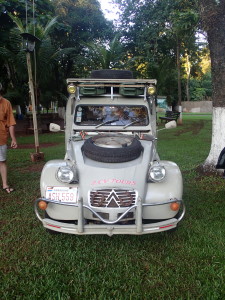 Old CV2 ready to go around the world 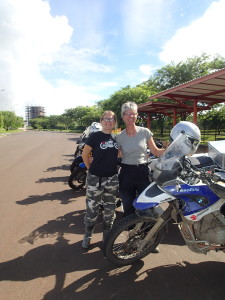 Feli is happy to find another female rider 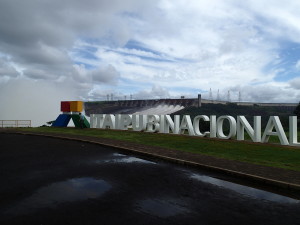 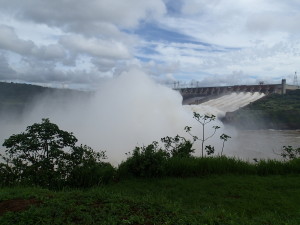 Gigantic overflow from the Itaipu damn, Capacity is bigger than the flow of Niagara Falls 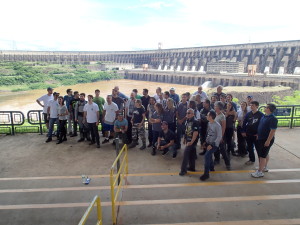 Private tour just for the bikers 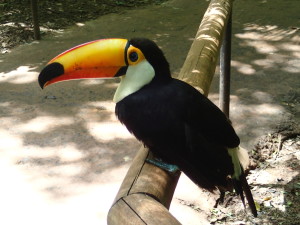 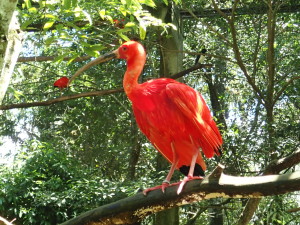 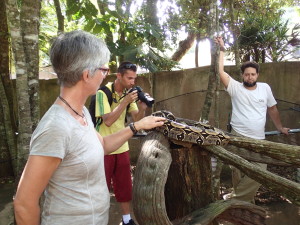 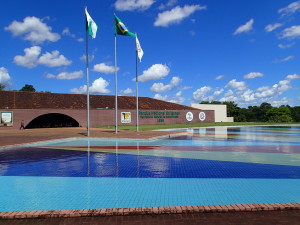 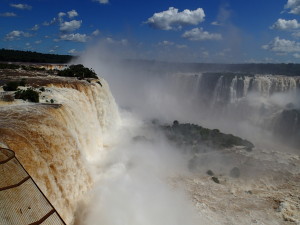 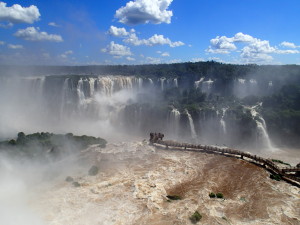 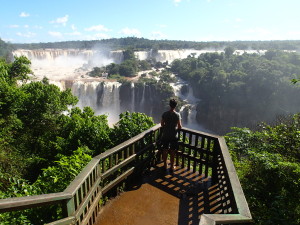 Spectacular views of the falls 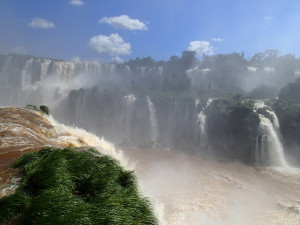 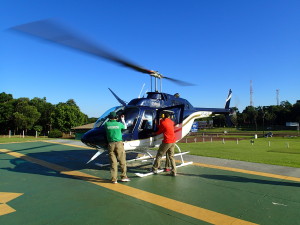 First Helicopter ride for us ever, what an experience 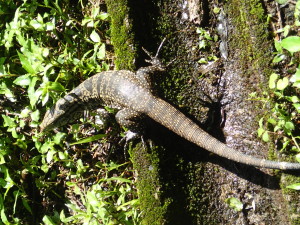 Lots of reptiles in the National Park of Iguazu 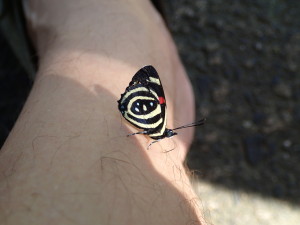 Butterfly resting on my leg 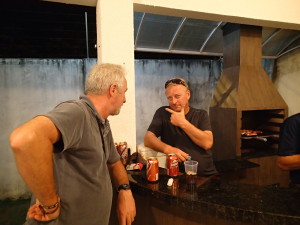 World travelers, Frank from Germany and Hugo from Australia 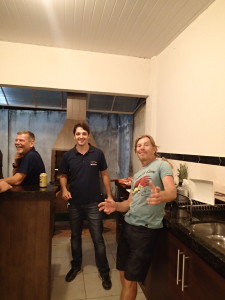 John (Alabama), our host Rodolfo and Pete (from Britain) 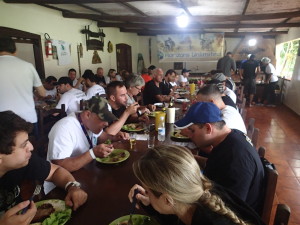 Having a good time with bikers from around the world

We spent another day in Buenos Aires. I left Heinz at the Hostel and walked to “La Boca”, one part of the City famous for the soccer club “La Boca Juniors” (Diego Maradona used to play for them!) and the colorful working class metal houses. Unfortunately we couldn’t catch a soccer game, because their schedule did not coincide with ours.

We had calculated that if we would leave on Wednesday we would have enough time to arrive in Brazil on Friday so we could attend the adventure motorcycle riders (Horizons Unlimited) meeting in Foz do Iguazu, just on the other side of the Argentinean border.

We went out for dinner on our last night in San Telmo, a nice part of Buenos Aires with cobble stoned streets and colonial style houses. Wednesday morning it took a while to get out of the City through heavy morning traffic and…of course delays due to demonstrations and road closures…a very common thing in South America.

Once we were out of the City going north we rode through miles and miles of heavily flooded land with run down houses and shacks desperately trying to stay dry. The life stock was clinging to the small green line alongside the highway to enjoy whatever grass was left. It looked very depressing, but then again we noticed that this area was also a river delta probably being wet constantly anyway. Around last Christmas they had days and days of heavy rain with lots of flooding not just in east Argentina but also over in Uruguay. By late afternoon we left the Highway and stopped in Chajari, a small town where we found a decent hotel to stay one night. Early next morning when Heinz was checking things on the Computer, he suddenly found out that we, being Canadians, needed a visa to get into Brazil. What a bummer! And it wasn’t easy, we needed a passport picture, apply online, pay a hefty fee and the whole process would take a while…unless we would go to the consulate in the border town of Puerto Iguazu and apply for it there, then we would have a chance to get one on the same day. What a disappointment, but then again it was our own fault that we did not check before. So we looked at each other and said, okay let’s see if we can make it there and try. We packed our stuff, left right away and rode about 800km all day to finally arrive in Puerto Iguazu at around 7:30pm. That indeed was a tough day. I could barely get off the bike, my ass was sore and…we were both exhausted. Apart from that it was a great ride. The landscape gradually changed into tropical rainforest over the course of the day. The soil became rusty red everywhere, the houses looked poorer and of course the agricultural land had disappeared. Back to sugarcane and banana trees!

We stopped at the tourist center at the town’s entrance to find out about a decent hotel. There were a couple of teenagers sitting at the front. The guy from the office ordered one of them to jump on his little bike and escort us to the hotel, which he had picked for us downtown, because by then it was pitch dark. We were grateful for that gesture and gave him a tip! We tried to contact Rodolfo, the guy over on the other side in Brazil, who was organizing the biker meeting, to see if he could give us some tips.

Next morning we walked to the Brazilian consulate to inquire about a visa. They were only telling us that if we would apply now (Friday) we might be able to get the visa on Monday. Ah bummer! Disappointed we went back to our Hotel, but got a hold of Rodolfo, who said no problema we should just get an exit stamp from the Argentineans at the border and then drive past the Brazilians. They in turn would never stop people, so we could get into Brazil without the visa (illegally???) It did feel wrong but in the end that’s what we did. We gave the Brazilian border guards a friendly wave and kept on driving. Oh well, when in Rome…So we arrived at the designated campsite, where a couple of other adventure travelers had settled in already. We were welcomed like old friends and soon after Rodolfo showed up and was happy to see us safe and sound. There was John from England on his Yamaha 660 tenere, on the road for 8 years already, Pete, also from England on his BMW 800GS, on the road for, I think 8 or 9 months, Mike from Switzerland (but born in Thailand… indeed a funny thing, when you meet a very Thai looking guy, who all of a sudden starts speaking swiss german!!!) on his Honda 250… and much to Heinz’ amazement Frank from Germany, on the road for several years also and … on an old BMW R100 GS from 1989 like Heinz, just to mention a few. Gradually more and more bikers came riding in over the course of the afternoon, mostly from Brazil. I tried to make out some familiar words, when they spoke Portuguese but I just could not find any! Later at night I was sitting outside of a pavilion mentioning to Heinz that I would probably remain the only riding girl in this bunch of guys, when suddenly two bikes came riding in with…finally one more girl on it, who had just about the same bike as me. Yesss!! After quickly introducing ourselves… turned out she was german, but living in Australia being on the road together with Hugo, her Australian boyfriend for around 8 or 9 months as well. They had also driven about 800 km and were too happy to get off the bikes. We had a very “social” night and…the beer was flowing! For Saturday Rodolfo had planned a tour of the Itaipu hydroelectric plant, one of the largest electric projects in the world. A joint venture between Paraguay and Brazil, supplying nearly all of Paraguay’s energy needs and about 15 % of Brazil’s. Unfortunately we had heavy rain all day Saturday so the tour was postponed to Sunday.

Needless to say, Saturday was mostly spent with…doing nothing else but drinking, talking and eating in between. Of course we met a lot of new people, Brazilians and non-Brazilians, a lot of technical talks etc. over all a fun day! Thank God on Sunday it didn’t rain so we had our tour of the Itaipu dam, which was awesome. With 50-60 bikes there, we were escorted by a police car through the terrain, at certain areas we could stop and take pictures and at certain areas we weren’t allowed to stop for security reasons. Because of the heavy rain recently the lake was over filled with water and they partially had opened up the dam, so we saw huge cascades of water coming out. What a spectacle!!

We spent the afternoon at the campsite again and had a great BBQ at night for the second time. It was Rodolfo, who organized all the meat and worked tirelessly to feed us all. By Sunday night it was mostly us travelers who were left and of course where there are men…there’s usually a lot of drinking, especially when there’s an Aussie involved. Hugo definitely did not prove us wrong!! Well, we had lots of fun!

Monday Heinz and I decided to make a short trip and see the Iguazu falls. We traveled with two up on his bike only 12 km from here (to safe on parking!!) We visited the bird park first, which is situated right in front of the National Park. A well designed park (Parque Das Aves) with partially rescued and partially endangered birds, but also reptiles. Most of the birds were natives to South America, only some from Asia or Australia. Very interesting! At one point there was a tamed Boa Constrictor, which I finally managed to pet! Woah, felt astoundingly soft! After that we had to take a bus to the falls. With lots of visitors it still was an awe-inspiring sight. Before the Rio Iguazu reaches the plateau the river divides into many channels with hidden reefs, rocks and islands separating the many visually distinctive cascades that together form the famous cataratas (waterfalls). In total, the falls stretch around for more than 2 km. We spent some time walking around, taking pictures and got wet from the mist, but it was a welcomed relief from the heat. We then returned by bus again and after we got off we made an impulse decision to take a 10 Min. helicopter ride over the falls. That was truly awesome! We loved it!

We returned to our campsite in great spirits and finished the evening with another BBQ at Rodolfo’s apartment outside with our new friends and fellow travelers.

Heinz and I as well as Frank and Mike, we are the last campers left at this campground. We have great hosts here who even gave us a gift of a bottle of wine to thank us for staying so long (is that suspicious?? No… it is simply nice!) At this biker meeting we met Klaus, a German fellow, who lives in Paraguay and will organize a rear tire for Heinz’ bike, so we will visit him tomorrow. Heinz can do another set of oil changes there. We have to do another “illegal” border run though, because officially we also need a visa for Paraguay, but Klaus told us that they also have an open border there so we can just drive through. (I sure hope so!!)