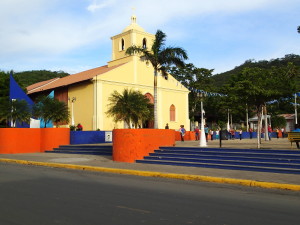 Two more days we spent in San Juan del Sur, a coastal town in southwest Nicaragua about 40 Minutes from the Costa Rican border. Again a popular town amongst surfers, although you have to take a bus that takes you to the surfing beaches. San Juan itself does not really have an attractive beach, but is a nice town.

So we took the time to relax at the hotel pool and just read our books! 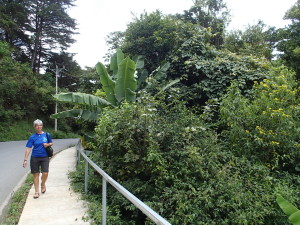 Thursday it was time to tackle another border crossing. It took about 1 ½-2 hours at Penas Blancas, a busy border crossing with lots of backpackers and the usual hecklers that want your money. We met 2 New Zealanders on bicycles, who are taking the same trip as we are…ON BICYCLES! One of them was looking really sick and admitted that he was not feeling well. I gave him some of my Imodium, after he told me why he wasn’t feeling well. 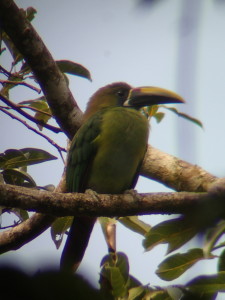 I gave away my last 5 Guatemalan Quetzales to a heckler, who kept following me, giving me all kinds of tips I didn’t need and felt I owed him something. He took them but wasn’t too pleased.

I personally liked Nicaragua quite a bit. Roads were excellent for the most part, nice scenery, also around Managua, where we passed a german school and Kindergarten!

In Costa Rica we decided to go to Monteverde, which is famous for beautiful rainforests and wildlife and has lots of privately run nature reserves. One of the hotel employees in San Juan del Sur told us though that the road to Monteverde is so treacherous that he didn’t think we could make it. 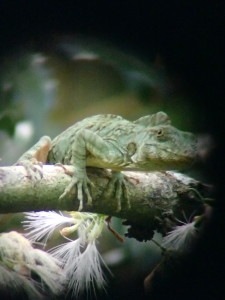 Lizard on the hunt

Well, we thought we’d give it a try. What a nightmare that was. First it was starting to drizzle, then the gravel road turned muddy and slippery with big stones and potholes, going up and down the hills. By then it was already too late to turn back, needless to say I was quite tense and “ whiteknuckling!”

We made it eventually without a crash or dropping the bikes!

In the early 1950s, a group of Quakers from the United States left their homes in Alabama and arrived in Monteverde at a time when the region was just beginning to be settled. 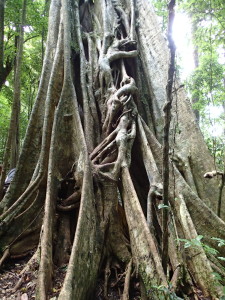 The Quakers, fleeing the United States to avoid being drafted into the Korean War, established a simple life in Monteverde centered on dairy and cheese production. Some of these families helped establish the Monteverde and Santa Elena Cloud Forest Reserves some 20 years later.

We are staying at a B and B place (Mar-Inn) and are enjoying this great area. As I mentioned there are lots of nature reserves here. We took 2 guided tours already. One nighttime walk through the rainforest with a guide and flashlight to see nocturnal wildlife. The nature guides know where to look and find those animals in places where I would have never seen anything. So we saw a Kinkajou( belongs to the racoon family) an armadillo, tree porcupine, a viper ( very venomous!), praying mantisse just to name a few. 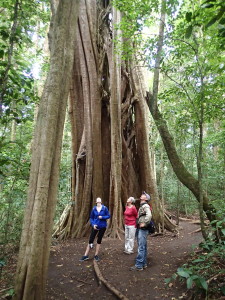 Ficus – we have those in pots at home 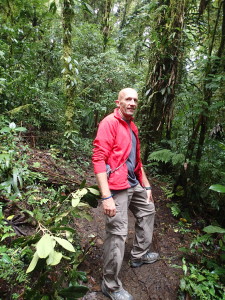 Next day we took a guided day tour, walked through the rainforest for 3 hours and saw all kinds of exotic birds (Quetzal, Tucan …) butterflies and a lizard.

Today we were hiking through the rainforest by ourselves in search of more animals, but didn’t see any!

It was still a treat!

Tomorrow we will leave, probably stay 1 or 2 more nights in Costa Rica and then tackle yet another border crossing into Panama. 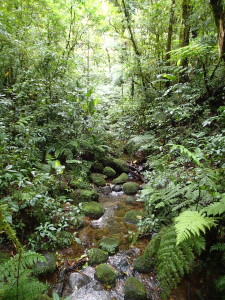 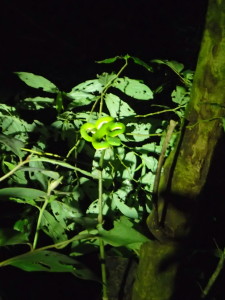