Well we don’t have a lot of pictures to show you, but let’s start with Thursday a truly unique day. We left Ten Mile Lake near Quesnel BC early, but it was already very hot. We didn’t think we could make it all the way to Langley near Vancouver so we picked a Provincial Park south of Cache creek near Lytton to spend one night. 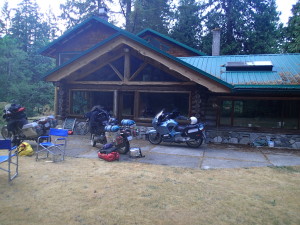 It was so hot all day, we were sweating so much, the wind felt like a hot blast from the heater constantly. We stopped in Cache Creek to have an ice cream and the guy at the gas station said it was 37C. I guess we will have to get used to this because it will be no different in Mexico and Central America. At the same time it was very hazy and smoky from various forest fires. We could see different spots while riding through the Fraser Canyon. 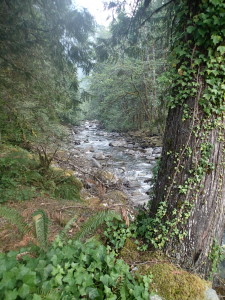 At this point we decided not to camp at the Provincial Park we picked and just kept going to try and get out of the heat and smoke.

Here’s when we had our first fight!! I needed to fill up my bike, so I signalled Heinz so we got off the TransCanada Highway into the small town of Lytton. Right at the entrance I saw a gas pump sign with an arrow to the right, slowed down waved at Heinz and turned right thinking he must have seen me turning right. I stopped at the gas station, waited for him to show up but he never came. So I made a quick decision to fill up and then go look for him.

Well, I couldn’t see him anywhere, drove up and down Main Street, took a side street until all of a sudden someone honked behind me. Heinz came up and was fuming and yelling at me, he couldn’t see me anymore in the rear view mirror was scared shitless thinking I was lying in the ditch somewhere drove around, couldn’t find me etc… I tried to explain my version apologized but we were both yelling and just driving off. So you can imagine the smoke that was now coming from our helmets and it was difficult now to focus and manoeuver the twisty ride through the narrow Fraser canyon in fairly heavy traffic. We stopped once for an “icy” water brake and found another Provincial Park near Hope to spend the night. 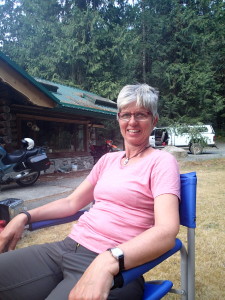 Relaxing after a “Heated Day”

So in Hope we had to also stop for another fill up cause, remember I filled up but Heinz didn’t. Right beside the Gas Station was a Pizza Parlor where we decided to pick up a Pizza so we didn’t have to cook for that night. By then things had cooled down and we were friends again, lol! A guy came up to us asked the usual questions where we were from, where we were going etc, then if we knew where we were spending the night. Then he went on to say that we could spend the night at his place and he would have a bed for us and we could have a shower, too! Heinz and me looked at each other and then made a snap decision and said okay. Outside we saw his parked BMW and thought it’s all good!

So, Don Wiens had a uniquely designed old log home outside of Hope right beside the Silver Creek where the salmon swim up the creek in late summer to spawn. What a nice treat to end this day. We parked our bikes right on his patio, wolfed down our Pizza and had not just one but at least 2 beers with that. Later he took us in his truck to downtown Hope for an ice cream and a stroll along the Fraser River. 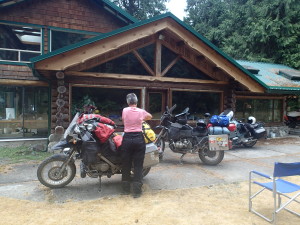 Bikes on the Patio

Before we went to bed he told us he had to get up at 4:30 am to go to work (he’s a contractor for heavy machinery working currently for a mining Co.) and that we could leave the doors open when we would leave. Wow!! It was awesome. We truly enjoyed this treat, thank you Don!!

So yesterday we drove to Langley, picked up some stuff at MEC, purchased some more maps for Central- and South America and left Canada for the next little while. We spent the night at an RV Park in Ferndale, WA. Today we tried to get the parts we needed for our bikes at the BMW Dealership in Ferndale, but since they didn’t have all of them we had to go to Seattle to pick up the rest at another Dealership. We had a response from one of the members from Motostays, which is an online community of motorcycle owners that are willing to host travellers and open up their shops for Motorcycle work. Michele lives in downtown Seattle close to the space needle, so that’s where we will go tomorrow.

One thought on “There is always “Hope””