I was sad to leave Atlin – but we had to move on. We went back the Atlin Road and then the Alaska Highway towards Watson Lake again to buy supplies. 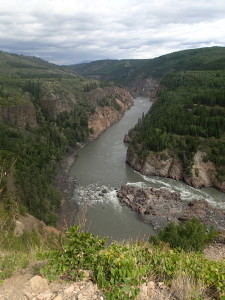 Next destination was Telegraph Creek. After tenting at Watson Lake Provincial Campground we headed down the Stewart Cassiar Highway (Hwy. 37) which is designated a remote highway that traverses through some of the most beautiful scenery in the province as it passes mountains, glaciers, rivers, lakes and canyons. The total distance between Hwy 16 and the Yukon Border is 725 km.

At Dease Lake we turned towards Telegraph Creek on an adventurous 112 km dirt/gravel ride along the Grand Canyon of the Stikine River. Following a First Nations trading route and the path of early gold prospectors, the road winds along the Stikine Canyon with dramatic views of the sheer walls cut by the river. The Tahltan First Nations has lived in this area for generations and still harvest the Stikine’s prolific salmon run. 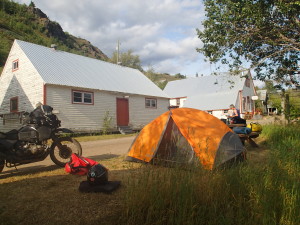 Campsite at the side of the road Telegraph Creek

After a 2 and a half hour ride we arrived exhausted in Telegraph Creek. The road was beautiful but also challenging with tight turns and loose gravel. The village consists of the old village down by the Stikine River with mostly abandoned buildings and a few residents and a new community up on top of the cliffs.

The community of roughly 250 permanent residents has very basic services. First a Tahltan settlement it became an important transportation/communication centre during the gold rush. The old buildings provide glimpses of a byegone era with a former Hudson Bay Trading Post and other turn of the century buildings. 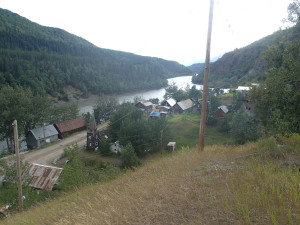 After asking for permission we put up our tent ride along those historic buildings along the Stikine River and explored the old settlement. We also met a couple from Sweden (Britt and Inge Haby) that started a long trip years ago in Argentina with their Mercedes camper and traveled North from there. So they shared many things they experienced in South America with us and we gave them some tips for the North (Yukon/Alaska).

After spending the night we rode back to the Cassiar Hwy. on Saturday to take another turn toward Stewart/Hyder. 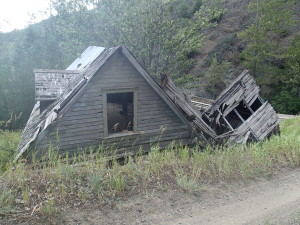 Stewart is a small community in B.C while Hyder is just across on the Alaska side. They are both at the North End of the Portland Canal which is a narrow ocean fjord that forms a natural boundary between British Columbia and Alaska. Stewart and Hyder have a few historic buildings restored and others are abandoned. The 65 km side trip has scenic overhanging glaciers, mountains and we saw lots of black Bears on the road. We settled at a private R.V park because we needed showers badly and it was suddenly hot. The weather forecast for the next seven days is over 30 degrees and no rain. 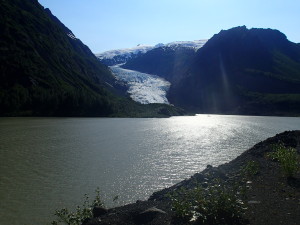 Sunday we drove a 37 km gravel road from Hyder to the Salmon Glacier which is the fifth largest in Canada and the world’s largest road accessible glacier. What a treat, the ride and scenery was spectacular. 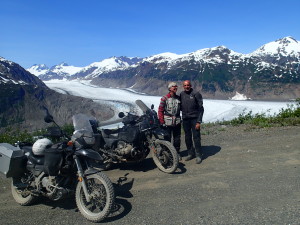 I must say all of the last three destinations (Atlin, Telegraph Creek and Hyder/Stewart) were well worth a trip and very unique and not touristy at all. If you drive off the beaten path you will find beauty and inspiration.

4 thoughts on “Telegraph Creek and Stewart/Hyder”