Denali Park has been a beautiful place, but is very popular among tourists. We packed our stuff and left on Saturday. The plan was to drive to Anchorage. I had purchased a sheepskin for my butt a couple of years ago at a BMW Rallye from a company in Anchorage and Heinz wanted one for his ( precious ) butt. 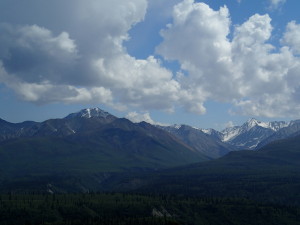 But first we decided to make a stop in Talkeetna, a neat little town with old buildings from the turn of the last century. Since it is Heinz’ mission wherever we are, we try local beer, we had to stop at the Denali Brewing Company on the way to Talkeetna have a little “ happy hour” and try some more beer. I had a really good and authentic Koelsch ( thought of my lovely family in Cologne!!!) Talkeetna was a neat little town, but again swarming with tourists, especially on a Saturday. By then it was already afternoon, we changed plans and decided to stay near Palmer on the way to Anchorage to go there early the next day. No state parks with nice campgrounds to be found so we had to take a private RV park called Kepler near the town of Palmer. 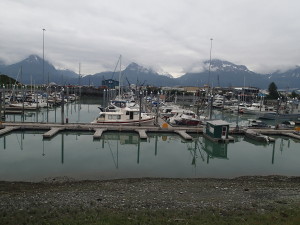 Boy did we get a good taste of trailer park trash there. The campground was terrible and later in the evening a group of people moved in beside us: father, his daughter with 2 kids and her boyfriend( not the father of the kids). What started the whole uproar was that daughter turned around her “antic” dodge caravan, must have driven over a root and lost all her muffler and exhaust from car. She was terribly upset, everybody shouted at each other, father and boyfriend almost had a fistfight, of course a lot of swearing, kids were crying, daughter was calling the police( or pretending!), father was drunk and still on probation…this all went on until 4:00 am. Heinz was fuming, ( I thought it was quite entertaining!) but I told him he was not to leave the tent since earlier I saw a hunting rifle leaning against the picnic table with these people. Anyway, short night, at 7:00am we packed our stuff and left. We arrived at the Alaska leather store in Anchorage even before they opened. I recognized the woman who owns the store, she was super nice and helpful. Since it was a cloudy and foggy day and to stay like that all day we decided not to drive to the Kenai peninsula, we wouldn’t have seen much anyway. Too bad, I wanted to go and see Homer, which is supposedly very nice. 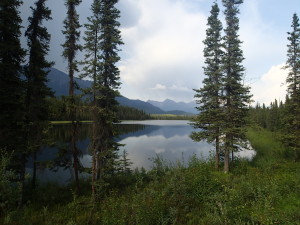 So, change of plans and back we went towards Valdez instead. I had this picture in my head of a little fishing town, with a harbour surrounded by snow covered mountains at the sea that I wanted to see. We took the Richardson Highway first towards Glennallen. Very scenic, surrounded by snow covered mountains, fun to drive, lots of curves etc. We made it half way to Valdez, stopped at the Tonsina Lodge to have some supper and by then dark clouds we coming and it was already thundering. They served delicious Russian food and with this weather situation they let us camp for free in their RV park section.” Just don’t put your tent up on the airstrip” the lady said,” cause a plane might be coming.” Ops! A lot of people seem to have “ airstrips” behind their houses here( for supplies in winter?) 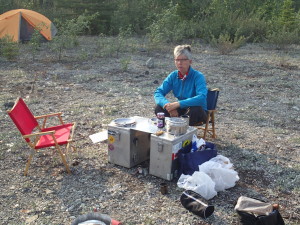 Next day we left in beautiful sunny weather but the further we got to Valdez, or the pacific, the more cloudy and foggy it got. We couldn’t really see the mountain peaks but still it was an incredible drive. We passed a big Glacier ( Worthington) drove through the keystone canyon, with huge waterfalls ( bridal veil and horse tail)on the side of the road, but in the end I got only half of my picture. Valdez is a nice town ( not so picturesque), harbour was okay, but the mountains were still covered in fog. Huge tanker ships stop here to get filled with Alaska Oil, we saw that in the distance. 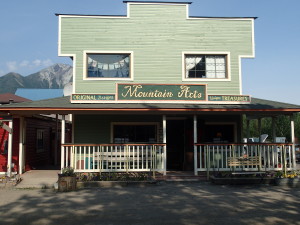 We walked around a bit then hit a grocery store to re-fill our food supplies, cause our next stop was to be the Wrangell-St. Elias National Park. When we rode the Dempster we met John a bicyclist from Kenai, Alaska who told us to ride to McCarthy and kennicott in the interior of the Wrangell-St.Elias Park, which is actually the biggest national Park of the US. Kennicott is home of an old copper mine from the 1900’s and US Park services is in the process of restoring it. For us it meant again about 60 miles of gravel road to McCarthy and a total of 96 miles off the main highway ( and no gas station!). There was our ( or mine?) next challenge. This road turned out to be worse than the Dempster Highway and it took us 3 hours for the gravel only. Officially you can not drive into McCarthy other than with a shuttle bus from Glennallen, or you can walk over a footbridge into the little town after you parked your car. The young guy at the visitor centre said he had seen motorcycle drivers cross the footbridge and nobody complained so.. guess what we did? Oh, and he told us where there is a good place to camp ( past the bridge!)That turned out to be the foot of a huge glacier(Kennicott), with lots of coarse gravel and another adventure to get through with the bikes!! 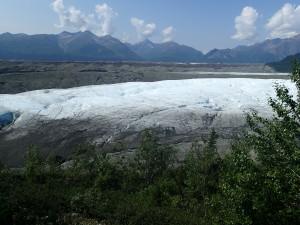 A wild place but with first class view of huge snow covered mountain range and of course the glacier, with occasional “ thunder” and cracking when the ice breaks off. (Heinz just proudly came back with a big piece of ice that he fished out of the glacier lake “ for the cooler and the beer.”)Very basic camping for free! The old mine is visible in the distance about 4 miles away. 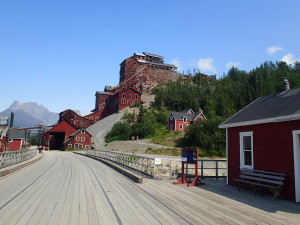 Today we hit the gravel road and drove up to the mine to have a look around. We did a hiking trail that brought us closer to the glacier and ended it with a loop around the whole mine complex. More than 600 people were employed here from 1911 to the late 1930’s. Then it was quickly abandoned. It is a busy place with construction workers that are restoring the place. Not too many tourists find their way here, which is kind of nice ( no big RV’s or camper vans!) We enjoyed lunch at a food wagon there, with sandwiches and home grown greens by a guy who used to be a chef in New York. So far we met many unique people here in Alaska, from other American states for example, who moved here cause they had enough of their life there…it is a different crowd!

4 thoughts on “From Denali to Wrangell-St. Elias”