Well, it has been a couple of days and I will try to catch up. We left McCarthy on Tuesday, back via the awful gravel road, which meant for me either “ eating” Heinz’ dust, or staying way, way back, since it was still so dry there. We took our time, continued to enjoy the beautiful scenery with snow covered mountains. At one lake we watched a moose wading in the water, literally diving down to find some water plants to eat. We made our way back to Tok and decided to camp at Vanessa’s motorcycle camping place again. She welcomed us back with open arms. There was an extreme fire danger, the whole area was very smokey, because there were numerous forest fires and choppers with big water filled bags were in the air constantly. but it was still far away enough to not being a threat to us. 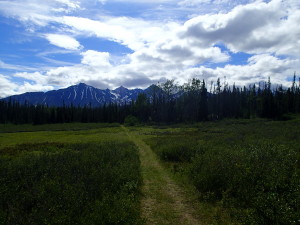 Wednesday we left Alaska and rode to Haines Junction to stay with Deb and Steve ( friends of Pat and Peter!) who welcomed us with open arms ( as well!) even though we’ve never met. We have been very fortunate so far with various people and places that were willing to take us in! Deb knew all the nice hiking areas and trails so Thursday Heinz and me hiked most of the day the Auriol trail which is part of the Kluane Nat’l Park and it took us to the foot of the St.Elias mountain range. We had a wonderful time and enjoyed talking with both Deb and Steve and this is for Deb: Heinz has indeed seen a Hummingbird that was confused by the redness of his camp fuel bottles and approached his bike while we took a break on the way to Haines. 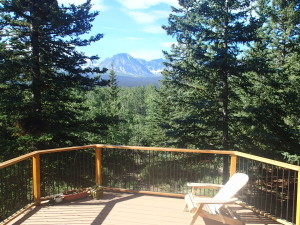 The ride to Haines turned out to be a messy one with lots of rain, many clouds covering the mountains and cool weather, so needless to say we didn’t see much of the rest of the Kluane Park Mountains.

Haines is a small fishing town, again in Alaska, not overly touristy that, I believe was also caught up in the Klondike gold rush era. One cruise ship was docked at the harbor, that was originally to dock at the Skagway harbor, but the sea was apparently too rough.

We stayed overnight at a decent campground in town ( no obnoxious people this time!!)

Next day we took the ferry to Skagway. It took about an hour for the ferry to go from one fjord to the next basically, but I thought it was well worth it, to see the mountains and huge waterfalls for once from a different angle! 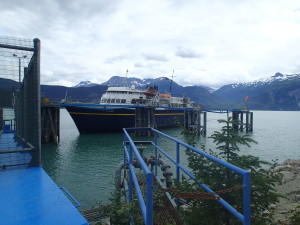 Ferry to Skagway from Haines

Skagway: VERY touristy, the main street almost out of a turn of the last century movie, lots of cruise ship crowds. To me it looked intriguing, Heinz wanted to drive right through and “ get the h… out of this place,” but I was trying to find an excuse to at least have a look at some shops, even though I couldn’t buy anything!! So, we still needed some ( less expensive!) beer to go, before going back to Canada. We had to look for a liquor store, which meant walking up and down main street. 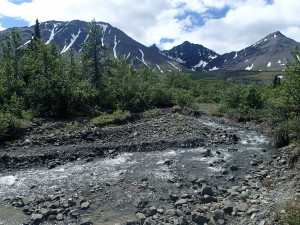 My chance to do some window shopping! Mostly jewelry, gifts, furs, expensive clothes, lots of bars etc. enough for me to get turned off especially by the shop owners, who stand in the entrance and want you to come in and buy something! There were even show girls dressed in turn of the century costumes hanging out the window with one leg trying to lure you into their dance show!!( Not of interest to Heinz!!) So we got the beer, fuelled up the bikes and left. 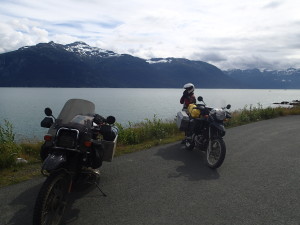 The plan was to get back to Whitehorse and stay there until Monday and find 2 new rear tires for our bikes. They both are pretty worn out. We called a couple of days ago, one dealer was booked solid for 3 weeks, another one might have some tires for us and we could get in right away.( Suspicious?) 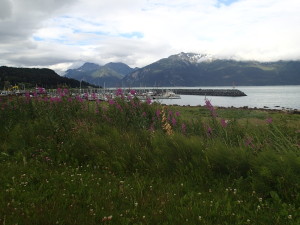 So from Skagway we climbed the White Pass a steep mountain range, that the gold rush stampeders also had to overcome. I could not imagine doing this on foot or with horse or ox, let alone with all the equipment and supplies they had to bring!! 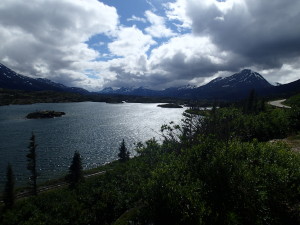 Anyway great twisty ride a joy for any motorcycle rider!! Fun to watch the train that was slowly making its way down from the other side. We passed the little town of Carcross ( used to be called Caribou Crossing) with lots of first nation and again gold rush history. 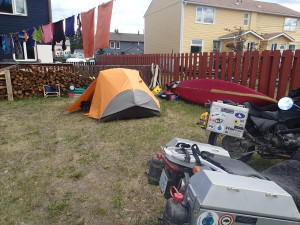 Squatting in Enily’s back yard 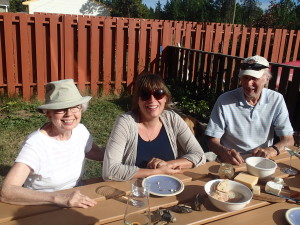 We finally showed up on Emilie’s doorstep again at 7:00pm, to say hello and …to see if we could crash on her lawn with our tent until Monday!!! Poor girl, what choice did she have? Her parents were there and before we knew it they served us whatever they had left over from their supper. Lucky us!!! We pitched our tent in the back and today we even had a taste of the Yukon’s first nations arts and culture. There is a festival going on in downtown Whitehorse at the first nation’s cultural centre with music, dancing and artist’s demos, like wood carving, basket weaving, caribou hide scraping etc. Interesting experience! 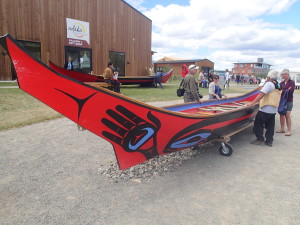 Cedar canoe handmade out of a 250 year old cedar log

So hopefully tomorrow our bikes will each have a new rear tire and we will head back to BC and to Atlin, which supposed to be really beautiful, we heard.