It has been a while my friends. It is tough to find WiFi in the North, no Tim Horton, no McDonald and no Starbucks. 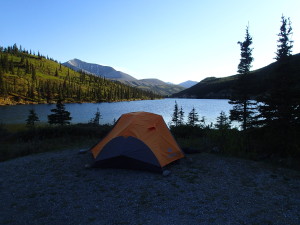 We made our way along the Alaska Highway from Fort St. John to Whitehorse in three days. Friday we stayed at a lovely campsite at Summit lake (Stone Mountain Provincial Park). It was an open campsite right at the lake, elevation 1300 m and no mosquitos. And my prayers were heard. There was frost overnight and the bikes were covered in ice – take that you damn mosquitos. 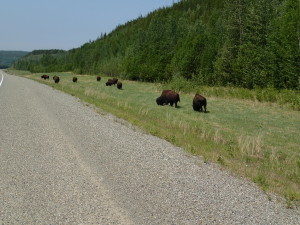 After another gorgeous riding day we stayed at Watson Lake Campground near Watson Lake (The gateway to Yukon). Watson Lake is also famous for the Signpost Forest.

The tradition began during the Alaska Highway Project in 1942, when U.S. soldier Carl K. Lindley spent time in Watson Lake recovering from an injury. A commanding officer asked him to repair and erect the directional signposts, and while completing the job, he added a sign that indicated the direction and mileage to his hometown of Danville, Illinois. Others followed suit, and the trend caught on. In 1990, a couple from Ohio added the 10,000th sign in the Signpost Forest. Today, there are over 77,000 signs in the Forest, and the number grows each year as visitors contribute signs and continue the tradition. The Town of Watson Lake maintains the site, adding more sign posts as they fill up.

It was amazing to see that there are so many German signs. The whole of Yukon seems to be full of Germans – oh noooo. There is actually a direct flight from Frankfurt to Whitehorse – unbelievable. We met a lot of Germans on the road so far and they love it here. At the visitor centre in Watson Lake all staff members were fluent in German language as well. I always thought Yukon is part of Canada, but I think it might be a part of Germany :).

There was a stretch on the Alaska Highway where we saw a herd of Wood Bisons. 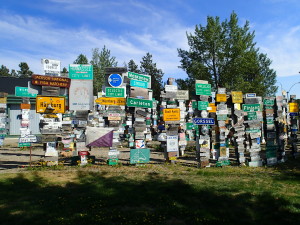 In general it has been very dry and warm up here this year and the whole West of Canada did not get a whole lot of snow, so it is going to be a challenge with forest fires.

Far more dangerous than the Bisons are the wild transport trucks on the Alaska Highway. Two days ago a truck swerved right into our lane and pulled back the last second. Maybe he was texting or falling asleep but that was pretty scary. 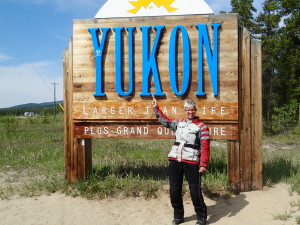 Made it to the Yukon

We arrived yesterday at Bill and Emily’s place in Whitehorse. Bill is the son of one of my best friends: Curlie and Jan in St. Thomas. First time we meet them here and what a nice couple. Bill is a Highschool teacher here in Whitehorse and Emily is a social worker. Whitehorse seems to be a vibrant city – we will explore more of it today and tomorrow.

7 thoughts on “Alaska Highway to Whitehorse”