After leaving Jasper National Park we were heading North towards Prince George. We stopped at Mount Robson for a short while to enjoy the view of this majestic mountain, which is the highest in the Canadian Rockies. 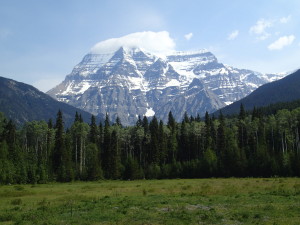 We made it to Bear Lake Provincial Park north of Prince George to camp at a site near the lake. The mosquitos were killing us, eating us alive – welcome to the north!! We decided to ride to Bear Lake to eat out instead of cooking, but there was no place to eat out so we returned to the campsite to cook. Never cooked that fast and went that fast into the tent. Just wished there would be -10 degrees to kill off those bastards.

After a quick morning breakfast (damn mosquitos) we followed the Highway 97 towards the Alaska Highway. North of Prince George it is all endless forests and lakes. Most transport trucks are loaded with logs. 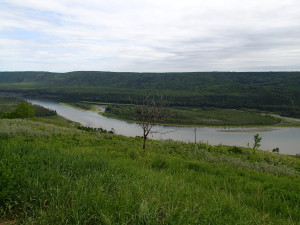 After enjoying warm weather it turned really windy and cold. We were stopping several times to add layers. It started raining and we pulled off to a side road so I could put my rain gear on. Got off the bike, got my rain gear and started putting it on when Feli casually mentioned that there is a bear ahead. It was a big grizzly bear about 100 meters ahead on a hill, looking at us. I thought holy crap, what now? Looked like the bear was looking at us as a protein source for lunch. But he just stared at us, not moving. We had the engines off and I was off my bike. It would have been interesting if he would have charged. One hundred meters down hill he could have done in 10 seconds. Would we have enough time to start the engines, get on the bike and go?? Thank god nothing happened. I finished putting my rain gear on and kept an eye on the grizzly and we left as quickly as possible.

So our wildlife tally is up to 10 black bears, 3 Grizzlies and some elk, moose and deer, but that last grizzly was way too close for comfort and in the middle of nowhere.

We are staying tonight at a motel in Fort St. John and heading to Fort Nelson tomorrow.

7 thoughts on “Welcome to the great wild North”